Is there a person you still think about?

That’s a good question. I don’t think all the time about a person particular. During walking the camino you meet a lot of people. Some hikers you say a quick ‘buen camino’ and that’s it. With other hikers you have a more depth contact. Sometimes you speak with someone for some minutes and this conversation has more impact on you then walking with a person for days. Talking during walking I felt the most intense. I’ve had fun and in-depth conversations with young and old. If I think about it now I get a flashback of a lot of names. 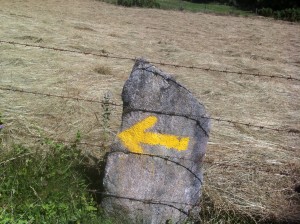 An Irish teacher who gave me a lot of good tips. A German teenager who was really enjoying the fact she was going to study after walking the camino. A forty year old Spaniard who said a good comment which hit me deep, while eating at diner, as I was the only one who spoke Spanish on that table. A French lady who did a self analysis very well, but while she was doing it she got in shock by her own discovery. A Mexican beauty in her 40’s who had study chemistry and lost her house. She was thinking about what she wanted with her life. A Dutch guy from Amsterdam who was living according matter of fact, we experienced some moments we both can’t explain. German dude who was stoned like a chrimp and wasn’t aware he was on the camino. While I thought someone was German it was in truth a German speaking Belgian, nice chat with him. Ofcourse I can’t forget the vegetarian German… lot’s of nice memories. Now getting a flashback of the Californian babe. The Basque girls. O yeah, blue jeans… The Spanish group who were amazed I walked from France, they only walked the 100km. The hostess of the albergue who arrange nice food and Formula1 for me. I didn’t mention names here… but some are in the book.

The nice thing to know is the camino walkers I think of whoom I didn’t walk the camino with. People who I met after walking the camino, via Facebook or meetings. Those who walked the Camino de Santiago from Saint-Jean-Pied-de-Port, or at least walked several hundred kilometers, know exactly what I mean.

The most enjoyable post-camino contact has to be the message I got on Facebook from two lovely South African young ladies if they could sleep some nights because of a cycling tour in the Netherlands. They both had walked the camino and wanted to cycle now in The Netherlands. Amazing visit was this, sharing camino moments. We still have on an almost daily basis contact via Facebook and WhatsApp.

During the meetings of the Dutch Santiago pilgrim association in Roermond I met someone who works at the tax government. We had some interesting and funny moments together. I learnt that actually people work at the taks government.

I can go on for hours.

Everyone who you meet is part of the whole story. It’s all about what you do with this. Do you put it aside, do you neglect it or do you take action. Your choice…. Buen camino.