I finally arrived in Puente La Reina after walking almost 19 km. This stage had a medium level of difficulty. Yesterday was till now the most easy stage. Strange if you consider the fact I had a lack of sleeping. You don’t have to read easy as easy. An easy day is still a hard one here, still harder than I ever experienced walking on Sint Pietersberg in Maastricht. Every stage is suffering. This night I slept well. I woke up in a nice way. I saw my beautiful view again and missed my love in that moment. I got up right away.

I started walking at 6.30. The first 2 albergues for getting stamps or breakfast were still closed. A little pity but you manage to focus really fast. Motto -> keep walking. The next village was 2.7 km according the sign.

When I arrived there I could see apart for the few houses a Coca-Cola sellingmachine. 2 euros for a can of Fanta. I had the opinion my body could use some sugar and bought the can… it was delicious. There was no way of buying food. I had some nuts from yesterday but was afraid this would give me pain. Not a decent breakfast. In the case I start feeling pain I would throw again the nuts but I still wanted to try it. I was hungry. I thought better something than nothing.

In Zariquiegui I took some breakfast. A sandwich with coffee for € 2,50. It wasn’t bad. I also filled up my water in that place. Walking was going nice. I had the normal little pains but nothing I worried about. I taped my left little toe and that didn’t hurt anymore. I was able to walk normal with this.

During walking I experienced and saw beautiful things. The field with sunflowers were really astonishing to see. The photos and videos can not show you how it really is. If you walk on that spot and you can see as far as you can and see only sunflowers, that’s impressive. There was a little church in Zariquiegui. I was walking and thinking in the church. It’s the San Andres church. I went inside to check it out quietly. The pastor let me stamp my pilgrimspasport do it by myself. He was gone immediately. I had the church for me alone. A strange sensation. I walked and thought. The statue of Maria was making a special impression on me. It got me straight in my heart. I walked emotional to leave the church but the door was closed. Suddenly the pastor again appeared and he opened the door which he indeed had locked before. Outside were people, I presume tourists, waiting. They were not allowed to enter the church. Only pilgrims. A special experience.

I want to tell something about Pamplona. The people were so drunk that some persons from a group young men behave violently. Drunk tough talk. They yelled ‘Peregrino‘ in a bad way. It didn’t hurt me but I didn’t want to seek the confrontation. What was I supposed to do against a group of young drunk Spaniards? Best was to say nothing and continue walking.

I had also something like… WOW… those smell more bad than me. Most people were of course friendly. A Spanish family walked by and a little girl, I think she had 6 years or so, said :”mira, ¿qué es eso?”. She said:”Look, what is that?”. She didn’t understand my clothing, pilgrim walking stick and backpack. I was the only person walking there without having the traditional white/red San Fermin colored clothing on. While passing by I heard her mother say something about Santiago. Kind of funny.

After the San Andres church there is an art monument which you are able to walk thru. I passed it but eventually decided to walk thru it. I forgot to write down about arriving the pilgrimsmonument when you arrive on the mountain, Alto del Perdón. I was happy to arrive on the top. The sound of the windmills were really annoying. You are custom to the silence and those windmills made a lot of annoying sound. At the moment you arrive on the top you complete forget this. An 19 year old German girl made the picture of me, her name is Natalie. She estimated me 40. Nice kid.. Ahum… I guess I need to shave again. LoL. We walked a bit together but I said sorry as I want to walk my own pace as I’m a forthy year old dude 🙂 It is important you walk your own pace, especially when going down so you don’t injure yourself.

When I arrived in Puente La Reina I was trying to remember the name of the albergue which had the swimming pool. I couldn’t remember. Honestly I only wanted to have some rest and enjoy a nice meal. I decided to take the first albergue. I saw a sign the next one was 500 meter but I didn’t want to walk an extra meter anymore. I was exhausted. I wanted as fast as possible diner, shower, doing the laundry and finally sleep.

The price was 9 euro while you also could take for 10 euro less bunk-beds and for 36 euro an independent room. I just wanted to sleep so I took the most cheap option. My earplugs were doing a good job. Using the washing machine cost 3 euros and the dryer as well. I didn’t had a lot of clothes because I cleaned yesterday all so I decided to do it by hand again. The price of the lunch was a shock…. 18 euros. I did it and don’t regret it. It was a good buffet. Exactly what I wanted a nice place to sleep and a good meal. After eating I checked if the laundry was already dry.

I went into the hotel which was beside the albergue, same owner, were also the restaurant was. I wanted to enjoy a beer in the bar so I was able to work on my notes (yes, this one you read now) in my journal. They had a nice flatscreen TV with ‘Tour de France‘ on it. Then I realized I missed the formula 1. Pity but no deal. Watching Tour de France while making your notes was also a pleasant way. I had a wifi connection and was able to check my facebook messages and SMS texts. I received several. Nice to read. I also called my sister Natascha for free because I was able to use VoIP via WiFi of the hotel. Yes, indeed nice if you know something about ICT 🙂 I chatted a short while with Natascha about her operation in the hospital yesterday. Also she told me that XBMC was not working anymore. After that I called my dad via Skype. That was also fun to do. My iPhone was behaving strangely it turned itself on when I turned it completely off which was draining my battery when I didn’t want to have my phone on. Via Cydia I installed bossprefs and it was solved. So WiFi in the bar was nice for several reasons. Till tomorrow!

O yes, I have more… I wrote in my journal 1 thing but now I know it’s more than one.

We are back. When I checked the laundry it wasn’t dry yet. I walked back to my bunk bed. There was a new guest arrived. Laura from Venezuela. She kept speaking English to me while I was talking Spanish to her. She flew from Venezuela to Madrid and from Madrid to Pamplona by bus. It was her first day. She told me that she forgot her iPod charger. There will be no one here to have this kind of charger she told me. Hihi. It’s the same charger than the iPhone uses. In the room were the bunk beds were there weren’t a lot of power outlets. In the restaurant I knew they had because I charged my iPhone there. I told Laura if she gave me the iPod I was able to charge it in the restaurant this evening. She asked if I already ate upstairs. I answered I did and it was good. She told me that it’s too expensive. And yes, in a way she was right. If you compare this price with other pilgrimmenus this is expensive. The evening buffet of 11.50 was maybe not worthy the money. A lot of food was the same that during the lunch and the problem was I wasn’t that hungry. I ate as much as possible and left. I thought taking as much as possible energy for tomorrow is important now.

After eating I went inside the living room. Really luxurious. Right away again plugged in the iPod of Laura. When I wanted to start writing in my journal Laura appeared in the living room asking me if I already had eaten. Yes, I finished eating some minutes ago. I think she was not in the mood for sleeping. I said loud “Huh?”. She was a language teacher which explains it all. She came from Hungary.

I started to notice that I was getting tired. I wanted to read a little bit and then going to sleep.

Some kids were making some noise and the mother said to be quiet. The father said that this is a livingroom and in the sleepingroom you have to be quiet, but not here. He had a point. It was also early. I started to chat with this family. Family Kujath (Rene, Rebecca and Lara) were from Germany. Their daughter Lara was 13 years old and walking the camino. She had an injury in her knees. She had a bondage which relieved the pain and she was able to walk normal. Her father was telling me he walked the camino in 26 days. At a certain moment you can walk easier and able to walk more distance he said. I thought that he lost his mind or so. Walking more than now? pfff we shall see. 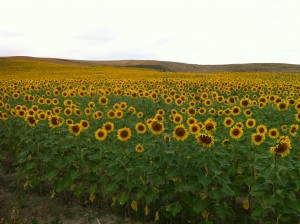 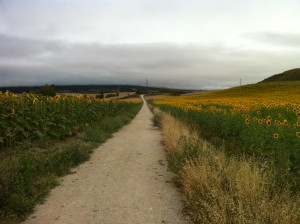 The camino and sunflowers 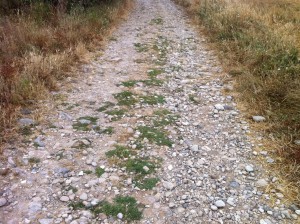 The one and only real ‘camino’ 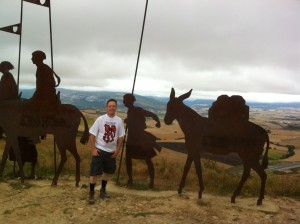 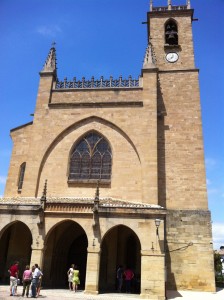 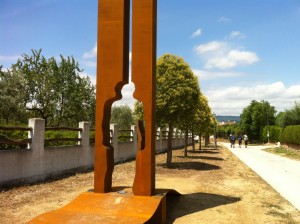 Art monument after the San Andes church in Zariquiegui 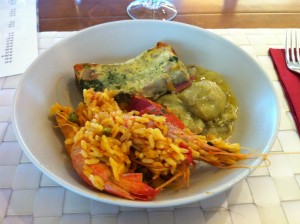 My starter during the buffet 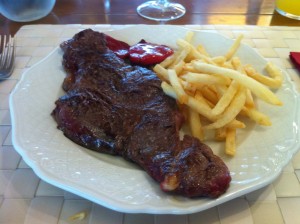 My main course during the buffet 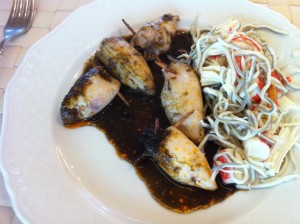 Even more food from the buffet 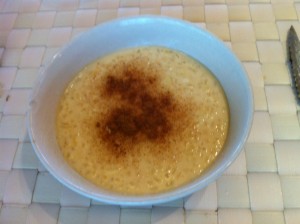 And.. last but not least… my desert…

Start of the day with the sunflower field.

Arrival at the pilgrimsmonument on Alto del Perdón