Wake up late at 05.40. It was 06.45 when I start walking. I did breakfast. 1.5 hours later than normal. I was guessing I can arrive at 14.00 in Astorga to eat something and watch Formula 1, I would like to see a race. I eventually arrive in Murias de Rechivaldo aangekomen at 13.30. The first bar had no TV. Pity. I asked when the next village is and she answered me 4.5 km. I looked further and noticed a little terrace. I thought I’m going to try there. A little bit before this terrace I saw a garden and they had a TV outside with F1 channel on (TV6). I walked fast inside. At the reception I couldn’t find anybody so I thought I walk to the garden to be sure. A woman asks me if she can help me. I said “I have 2 questions.” Can I watch Formula 1 here and can I maybe eat something here. She said follow me. She walked to the kitchen and showed me meat. Is that good? Yes ofcourse I said. It looks delicious. Come with me she said again. We are now walking to the direction of the garden but what I had seen was the garden of the neighbors because…. we walked into a living room.  She didn’t get the TV on. She didn’t know how to do this and she told me she is going to ask the owner. He came quickly and turned on the TV. BAM F1! Just for the start of the race she brought me the food. Looks really good. Meat with aubergine baked. She asked me if I wanted some wine with it. I said no water will be nice. I didn’t know if I wanted to walk more later on. I’m going to watch the race game now.

It’s now 19.55 and I arrived in Rabanal del Camino. First again about that formula 1 race. That was awesome. The fights of racing and excited till the last lap. 4 lapes before ending the game I started to prepare my things and when I knew who was first, second and third I left. I cleaned everything. The food was delicious and ofcourse I had spilled some breadcrumbs. I turned off the TV and closed the door. I was searching for the woman but couldn’t find her. The owner told me please come here. I asked him polite how much it was for everything. He told me 5 euro. Wow… that was nice. They were really friendly. Just relaxing in someones house it’s living room… with my feet (shoes and socks outside) on the couch watching TV. I asked a stamp for remember this fantastic experience. The alberge was named Casa Las Aguedas in Murias de Rechivaldo.

At first I decided to walk till Murias but fast I was thinking maybe it’s also possible to walk till El Ganso. When I at 17.30 arrived in El Ganso I thought… Rabanal with 7 km extra is also doable. Almost 1.5 hours later I arrived. That’s a nice pace. I didn’t took the municipal alberge. Misschien not the most smart decision because later I saw for 4 euros they had Wifi and this one (El Pilar) was 5 euros without Wifi. Good thing was the good, Macaronis with Chorizo for 3,90 which was delicious. At noon I didn’t drink beer or wine so I decided to drink some beers now, I took 2 beers. I earned them I was thinking to myself. At last I did manage to walk 43 km today. Tomorrow I don’t set my alarm. Tomorrow the plan is 35 km, a quiet day.

Onbelievable I call 35 km a quiet day. It’s 10 km less than the last 2 days. My right toe it’s nail hurts. So calm on. I noticed it when I took of my shoe something was pressing it. When I push it it doesn’t hurt, so I think it will be no issue tomorrow.

I called my dad to say everything is ok and then I go to sleep. I’m, how is this possible, tired. 6 km before I arrived in Astorga there was a little booth. Donativo. A kind of hippie. David was his name and originally from Barcelona. Strange person, but those are the most funny and interesting. Later write something more, now too tired.

Tomorrow I try to arrive till Ponferrada, That would be 34 km. Tomorrow after walking approximately 1.5 hours I will arrive at the iron cross where I will lay down 3 stones which I took from St. Pietersberg. Curious. Goodnight!!!

Called to home. Mom took the phone. Was nice to speak with her. I told her about Huib and me seperated now because she asked me if I was walking alone or with people. Mom asked me do to her a personal favor and I promised to do it, from then on I did it everytime I could do it.

Today something spirituals happened to me I can’t explain. It’s too personal to write down here. I will explain it to people face to face. 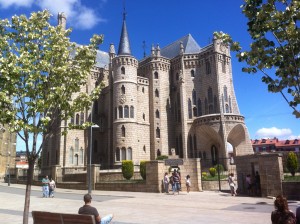 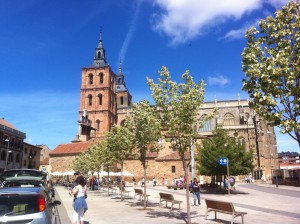 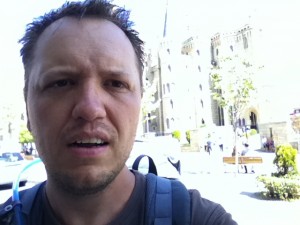 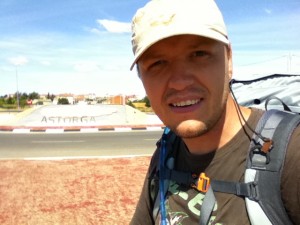 Enjoyed watching Formula 1 during the camino…

With some nice food….

Decided to walk some more…

Thinking I’m at my destination of the day while…

I still had to walk a bit… 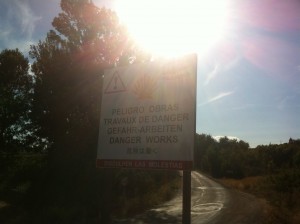 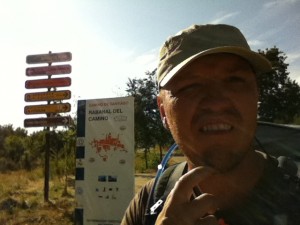