I had a strange dream. Something wrong with dad. I stopped with my camino to go back to home. When I arrive there everything was ok with dad and I didn’t know whether I had to finish the camino or go back to Spain. I got awake.

I noticed that Huib wasn’t in bed anymore. He was sleeping 1 bunkbed next to me. A short while later I saw him going back into bed. I thought nice we can sleep a bit more. During walking Huib told me he went to the bathroom around 4.15.

We should walk together till the first church in León. I wanted to go inside, he kept walking. He changed his mind and went inside. Just a short peek he said. I went inside and it was beautiful. I took a moment of reflection and enjoyed the quietness. Then I left. No trace of Huib. After walking a while in León… who came walking in the opposite direction? Correct. Huib. I said “and?” “Yes,” he said, “I want to go back to the church. I’m apparently now starting my spiritual journey.” I said “Nice”. A sober young guy from Amsterdam who is experiencing here his spiritual journey. I have to admit I didn’t see myself als spiritual as well, don’t confuse sprititual with religious, but during the camino things happen which you cannot explain in 123 words.

Back to this morning.

It started with a little bit fear. I pulled out an earplug and half of it stuck in my ear. Not good. After fumbling a while I had it out. The next thing happened. I thought why does my backpack looks strange. Then I saw a big spider on it! As big as the camino logo. I went from dull to awake in less than a second. In the meantime Huib came also inside the bathroom and said ” oh shit “. I went cool to take some toiletpaper and took the spider and flushed it. Solved.

I met 2 Germans in Villadangos del Paramo where they said to stay today. We arrived together. One asked me if I also came from León today. No, Villarente was my answer. Then you are fast, was their response. I left at 05.30. Wow said one. At that time we were still sleeping. We spoke a bit chitchat and then I said… I’m going to the next village!

I feel well. Was pithy but went well.

At arrival at 14.15 I was tired. According my own list I had walked 44.1 km but according a Spanish young woman it was 38. Both are far. The alberge hostess was friendly. After showering I asked her when can food be ordered. I would like to eat in the afternoon soon. She said “I can prepare something for you now if you want.” I replied “Yes please”. I choose salad as starter and chickenfilet as main dish. 15 minutes and it’s ready she said. I took my diary and start writing. Sleeping costs here 4 euros, menu is 8 euro and drinks are 1 euro. Talked a lot with her, was nice. She said sorry for the mess. Things of the previous pilgrims weren’t cleaned yet. I said don’t worry. I’m too tired and too hungry to worry about that. It’s ok. It was a nice dinner.

When I finished food I asked for WiFi. I saw a PC which you can use for internet if you pay. Often they don’t give you the password in that case, it’s for them privately. She gave the password to me with pleasure. I took this opportunity to call via VoIP with some people at home, free. Checked the emails, nice reactions. Not nice, super. I wanted to relax a bit by watching some ‘TV’ and watched via my iPhone to an episode of ‘Late Late Show with Craig Ferguson‘  and as bonus an episode of ‘MASH‘. Enjoyed it a lot… Tomorrow I don’t get up at 05.00 but at 05.30. I also checked Natascha’s PC via Logmein because I read something was wrong but I didn’t see strange things. I called her and it was working again. Good to know. I’m going to prepare me to go to sleep. Tomorrow I want to walk till El Ganso.. 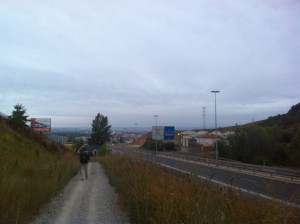 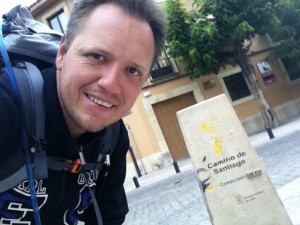 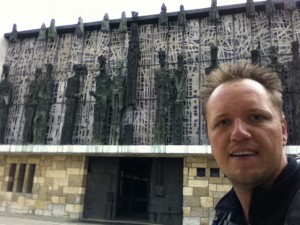 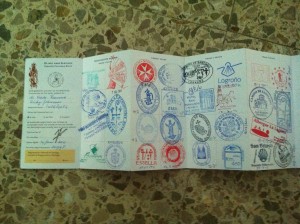