So… a new day. Slept well in the 2 star hotel. We said (Huib and me) to leave at 07.00am. That’s minimal 1 hour later than normal. Feels like taking a good sleep! We started walking and right away it was hard because it went a little bit hill up. At the moment we passed the difficult point I didn’t had any pain except my pads. We did have enough food with us. We didn’t had to stop a lot of times because we had enough bread with us. Saves a lot of time and money. We took only 3 short breaks. We didn’t visit the Cathedral of St. Domingo. We had to pay for entrance and I didn’t feel into it. You loose money of your budget. Strange that in those little villages they open specially for you the church and here they ask money. The normal price was 3.50 and as pelgrim you pay 2.50. Strange but ok, not feeling into it. Doesn’t feel good. The walking pace was good. The short breaks were doing well to my body. My pads were better after the breaks. It was a nice and relative easy stage. Arriving in Grañon was a wonderful feeling. We were in a hostal named Hostal Peregrinos San Juan Buatista. A world of difference compared to yesterday. We had to get our pilgrim stamp in a bar named Teo. We took one beer. We asked for some food at 4.45pm but they said we could better wait and eat in the hostal at 8.00pm because it was good and free, according donativo principle. I said that we already heard this but that it was a long time before dinner time. She told me that at 5.00pm a bakery and supermarket will be open. We went to the little terras they had and enjoyed our beer. After some minutes I went inside to check if I could charge my iPhone. She told me there were 2 outlets. The first one I saw was behind a corner. I doubted to let my iPhone there. Then the barlady told me to put my iPhone on that table and she would watch it for me. I was minimum 15 minutes outside while the bar was busy with pilgrims. I enjoyed my beer and I didn’t worry. That’s something I wouldn’t do here… strange huh.

Shortly after 5.00pm we went walking to the bakery. The name of the bakery is ‘Jesus’. While walking inside you had to pass another door before you came in the bakery. When entering this room we were welcomed by a smell you cannot describe. Immediately your brains understood you are in a true fresh bakery. What a nice smell. We took some croissants and I asked what kind of delicious pastry was there. I asked in Spanish if it was made with apples because I recognized it. She said it was indeed with apple. Huib asked me what I asked her. I told him it was with apple. Yes, we would like have some of those. The lady of the bakery asked while cutting the piece if it was big enough, completely un-Dutch (Dutch are famous for their stingy-ish), we said both at the same time “Nee, groter” which is Dutch for “No, bigger”. She found that really amusing. She told us that most people wanted less. She said Germans used the word ‘kleiner’ (smaller) and that’s why she knew the difference between klein and groot (small and big). We thought it was a little piece so we asked for a bigger one. It was delicious. I was really fresh made. The true fresh bake bakery. You don’t find those here anymore so fresh and friendly. Everything was only 3.66. We went back to the albergue. When arriving we noticed they opened another room because it was so busy. This one was on the ground floor. We went upstairs and took our things and moved to downstairs. This is easier when leaving in the early morning. You disturb less people and you don’t have to walk stone stairs in the dark with your backpack.

Something funny about the hotel. When we left this morning I asked to Huib if he had everything. He said yes. I told him not to forget his mobile which was laying on the bed! We left. When we were outside the hotel and were walking of the steps he said…. MY camino walkingstick! Funny and really important. For me the hotel was also the first day since my camino de santiago started I slept under blankets. 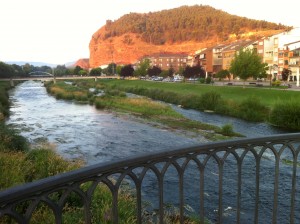 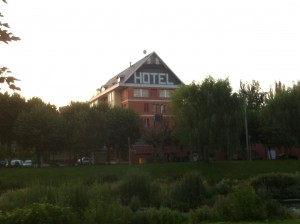 Hotel where we slept 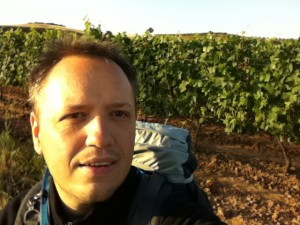 Me with famous grapes of Rioja wines… 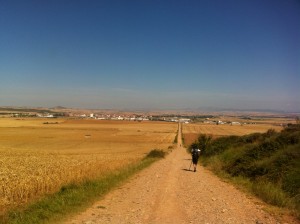 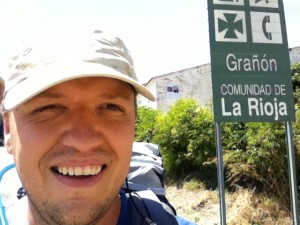 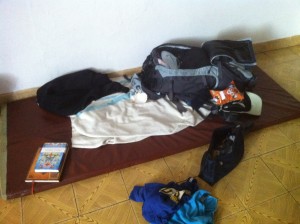 Bit luxury level difference with hotel or at home 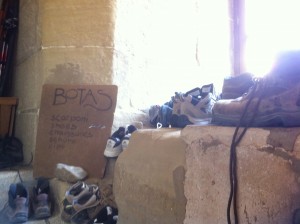 Place for put your boots 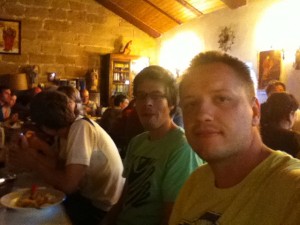